Seven Ways To Save On Your Kitchen Renovation

Seven Ways To Save On Your Kitchen Renovation 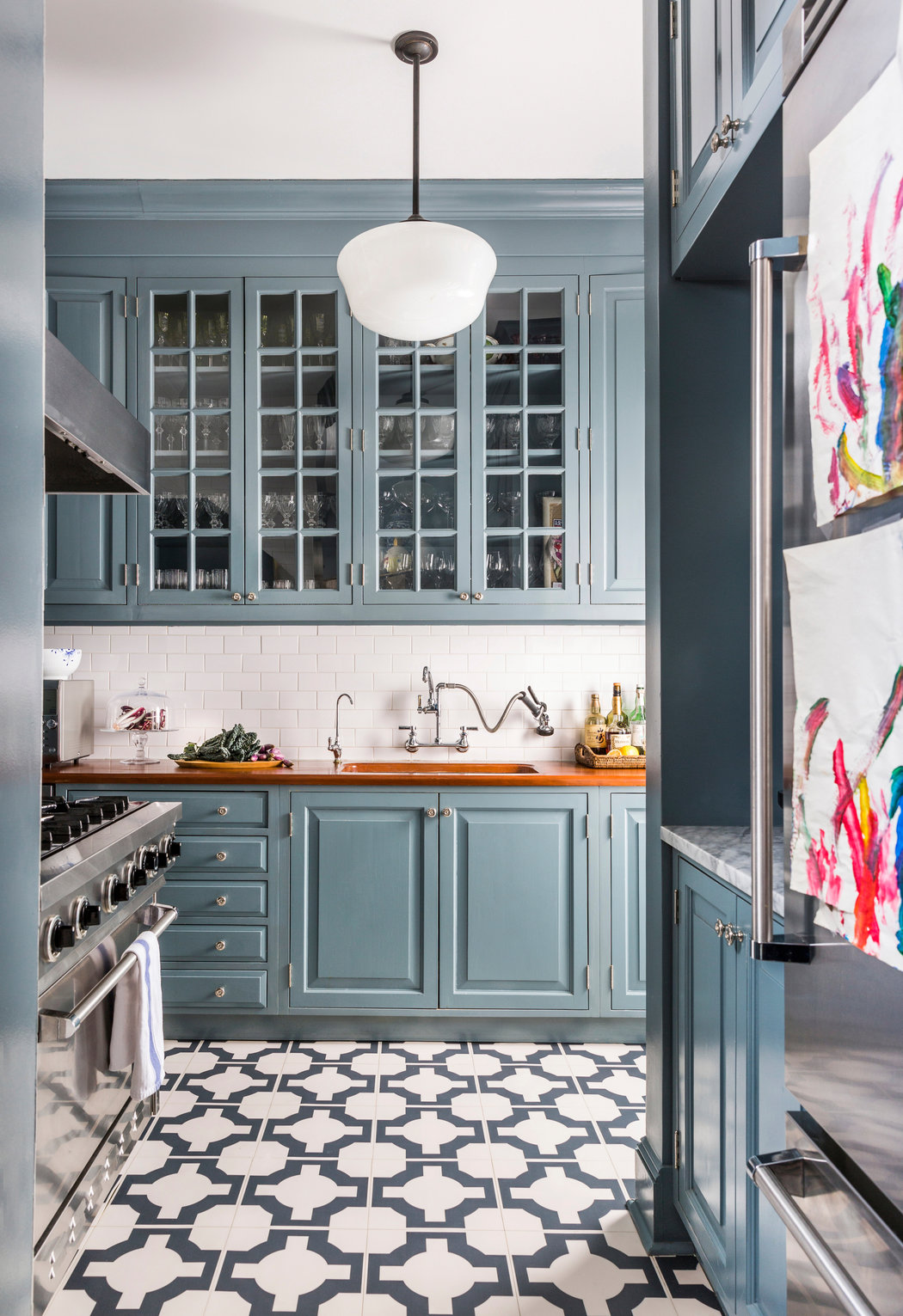 Renovating a kitchen is never cheap.

The average national cost to update a 200-square-foot kitchen, including installing new flooring, semi-custom wood cabinets and standard appliances, is roughly $62,000, according to Remodeling magazine, which tracks the cost of home improvement projects annually. Adding luxuries like stone countertops, a built-in refrigerator, a commercial-grade cooktop, designer faucets and top-of-the-line custom cabinets can bring the cost to about $123,000, on average.

But there is another option. Before you empty your bank accounts overhauling your outdated kitchen, consider giving it a face-lift with these tips from designers.

BRING OUT THE PAINT “A bold color and modern hardware can breathe new life into old, ordinary cabinetry,” said CeCe Barfield Thompson, an interior designer who gave her own 1990s-era kitchen a makeover a few years ago by painting the cherry wood cabinets Smokestack Gray by Benjamin Moore. “The dark-blue glossy paint added a sophisticated pop to what had been a drab and dated wood kitchen,” said Ms. Thompson, who also covered the pea-green tile floors with a Celtic-inspired graphic laminate, Parquet Charcoal by Harvey Maria, “for added impact.” Ms. Thompson spent just $7,050, which included the laminate flooring, the labor and all the new Baldwin cabinet handles and drawer pulls. It was an “extremely cost-efficient fix,” she said.

REFACE THE CABINETS For cabinet fronts made of material that cannot be painted or stained, consider refacing, also known as resurfacing, which involves keeping the existing cabinet framework and replacing all the doors, drawer fronts and side panels with new ones. Carolyn DiCarlo, a Manhattan-based designer, took this approach when she was working on a loft in the Dumbo section of Brooklyn last year. After remodeling the living area, “we saw that the kitchen was a bit tired-looking next to the renovated part of the loft,” she said. Instead of ripping out the old cabinets and installing new ones, Ms. DiCarlo exchanged the cabinet fronts “that had yellowed and chipped over the years” for recessed-panel doors lacquered white. 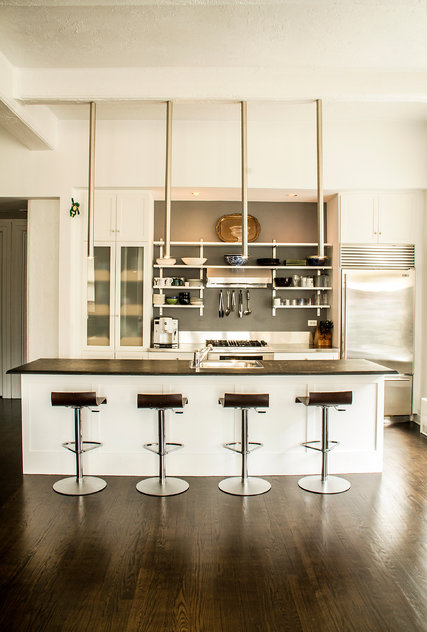 OPT FOR OPEN SHELVES If your cabinets are too far gone to reface, open shelving will reduce the cost of upper cabinetry, said Liz Tiesi, the owner of Threshold Interiors. “That way you are only paying for the piece of wood to make the shelf and the bracket to hold it up — not an entire cabinet box, which is a lot more in material and labor,” she said. It also eliminates the need for hardware, which can add up, she noted.

Another way to reduce the cost of cabinetry is to use particleboard where no one will see it. “A lot of people think they have to have all-plywood kitchen cabinetry, and they don’t,” said Mina Fies, a designer in Reston, Va., and the creator of the Renovation Roadmap, a website dedicated to helping homeowners work with contractors and stay on budget and schedule, going online later this month. While plywood should be used under the sink (in case of a leak), Ms. Fies recommends using particleboard to build out the upper and perimeter cabinet boxes. “You can still use maple, cherry, hickory, etc., for the door and frame, which is what you actually see,” Ms. Fies said, noting that she cut cabinet costs by $1,420 using this method in a 17-by-15-foot kitchen remodel.

DO THE DEMOLITION YOURSELF “It can be pretty easy to do over a weekend with a friend or spouse,” said Ms. Tiesi, who turned a former office space in TriBeCa into a four-bedroom apartment for her family and recently took apart a Brooklyn kitchen with the help of her husband and brother-in-law. Begin by turning off your circuit breakers, water and gas. Remove appliances and plumbing fixtures first, followed by cabinets, backsplash and counters, Ms. Tiesi advised.

“It really doesn’t take any precision; you just don’t want to hurt yourself,” she said. “Be ready with black contractor bags to put loose debris in. The larger items I would take outside and have ready for garbage collection, if possible.” To ease the workload, contact your local Habitat for Humanity ReStore or other nonprofit home improvement stores like BIG Reuse in Gowanus, Brooklyn, and Astoria, Queens, which will remove used appliances in good condition. “You can write them off, and you don’t have to worry about disposing of them,” Ms. Tiesi said.

INSTALL RECYCLED APPLIANCES The same stores that are willing to haul away your used kitchen components also sell leftover building supplies, showroom floor models and items from new developments that buyers decided not to keep. Sign up for their email newsletters to get an idea of what they have in stock. In July, Green Demolitions, a store in Fairfield, N.J., that sells used luxury kitchens and other fixtures collected by the nonprofit donation program Renovation Angel, ran a “make an offer” sale on already discounted pre-owned luxury kitchens, including a traditional Russet kitchen from Rye, N.Y., with a fireclay farmhouse sink and Miele and Viking appliances, for $7,700. Contractors and do-it-yourselfers also sell surplus on Craigslist. Just be sure to test the appliances before you take them home, because few come with a warranty. 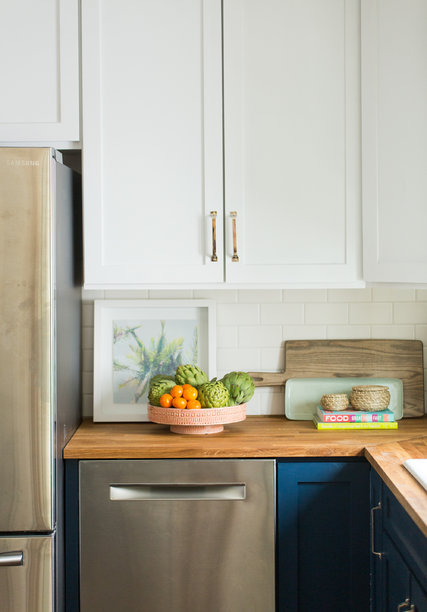 GO FOR BUTCHER BLOCK For a clean-looking countertop on the cheap, nothing beats butcher block. You can get one for as little as $99 at Ikea, which sells precut butcher-block counters in standard sizes. Butcher block brings warmth to an otherwise sterile kitchen and has a number of practical applications. “It’s kind of like having a built-in cutting board throughout your kitchen,” said Kimberly Winthrop, an interior designer in Santa Monica, Calif., who paid $500 for 20 feet of butcher block to use in a kitchen makeover she did earlier this year for Laurel & Wolf, the online design service. Keep in mind that there is some maintenance involved in keeping butcher-block counters looking new: They need to be sanded and oiled regularly — typically twice a year.

DON’T CHANGE THE LAYOUT “Moving walls, electrical and plumbing is where installation costs spike,” said Dana Hudson, the divisional merchandising manager for kitchens at Home Depot. But while you’ll save by keeping those components in place, you shouldn’t skimp on functionality, she added. If moving that corner sink will improve the flow of your kitchen, don’t hesitate to adjust the layout. Or find an alternative that solves the problem.

“We had a client who insisted her kitchen was too dark and that the only way to fix it was to reconfigure the walls to allow more natural light in,” said Ms. Fies of the Renovation Roadmap. The new layout, which involved moving plumbing to reposition a bathroom, would have added thousands of dollars to the budget. “We showed her several different designs and talked through the pros and cons of each,” Ms. Fies said. “She decided on a design that did not open up the wall and chose to install recessed lights, pendant lights and under-cabinet lights instead.” The cost savings? About $8,000. 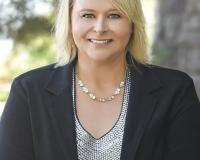 Market Report Dec 22 2020 - 2020 has been quite the year for
Why You Want An Experienced Agent - Something I see everyday in real
What Is Going On In The Housing Market - Sept. 19,2020Hard to imagine we
Trader Joes Coming To The Queen Creek Marketplace - The Kallhoff Team is super excited

In just a few seconds, you will be searching just like a Realtor®

The Team with experts in this local area, We bring a wealth of knowledge and expertise about buying and selling real estate here. It's not the same everywhere, so you need someone you can trust for up-to-date information. We are eager to serve you.

2020 has been quite the year for the Arizona Real estate industry.&nbs

Why You Want An Experienced Agent

"Rebecca and her team were very responsive and attentive to our selling needs. She made us feel valued and understood the urgency of our concerns along the journey. It was a smooth and worry free experience. We would highly recommend her services to others and use the Kallhoff Team for future endeavors."

This is a list of your favorite properties. We will email you if a property is reduced or leaves the market.

This message will go directly to the head of our team.